It’s about time I wrote an article on being an entrepreneur. I believe this is one of the top 3 most important articles you will ever read on my site (or any site for that matter).

Before we get started, I want to give you a little debriefing on my background and how I got to where I am right now (a business owner and entrepreneur).

As I discuss in a previous article, I did the college thing and attended a university in north Texas for 5 years from 2004-2009. I joined a fraternity, got my degree, and got a corporate job within several months of graduating.

Growing up, I always knew that I would be miserably unhappy, MISERABLY UNHAPPY, working in an office with a cubicle and overhead fluorescent lights. I was dreading it so much, that I purposely stayed in college a year longer than I was supposed to.

Yet for some reason, that’s exactly where I found myself at age 24.

I succumbed to the pressures of what I thought I was ”supposed to do” to be a success in life.

As a quick side note: I wouldn’t trade anything to go back to being as clueless as I was at age 24, ANYTHING. The knowledge I have now so far exceeds where I was at age 24, that it’s shocking when I stop to think about it.

Growing up, I think the reason I knew I would hate having a corporate job, was the same reason I hated school so much: having to spend my whole day learning about or doing something I didn’t care about. I just figured a job would be the same thing and would be something I’d ”have to do” to pay the bills.

Anyway, after starting the job it did not take me very long to realize how miserable I was.

The worst part about working for this company was not even the job itself, it was the people I had to work with. I worked as a physician recruiter, for a company that was primarily guys. Now you would think working with all guys would be good, and it was better than it would’ve been if there had been more women in the office, but it was still pretty miserable.

More women there would’ve meant more estrogen, which would have meant more moodiness, bitchiness, and random bad moods that undoubtedly would’ve crossed my everyday path. So yes it probably would have been worse with more female energy there.

The problem with these guys, however, was that all they talked about was sports. ALL they talked about was sports, and if you know me, you know I pretty much don’t give two shits about sports, especially basketball, which was what they all loved. I could never comment on anything they were talking about because their entire life outside of that office was just completely consumed by sports.

They must have each watched ESPN 5 hours a night… I also hated having to walk into an office every day, and look at the same people. I wanted to kill myself during the 2 months that I worked there.

I lasted about 2 months and gave my notice. So back to waiting tables I went. The unfortunate thing about this was that waiting tables was so much less mental stress that it actually became enjoyable after my brief stint in the corporate world. That wasn’t a good thing, because as a waiter I was making shit money, and was often going out after my shifts and drinking a decent portion of it away.

It was truly a time in my life when I was lost.

This went on for about 4-5 months until I was told by a fraternity brother that an insurance agent he worked for was hiring a telemarketer. I reluctantly went and spoke with the guy, and being the master salesman that he was, he somehow convinced me that I wanted to work 20 hours a week cold-calling on people for him. There was an interesting thing that happened here though. He agreed to pay me on a production basis, meaning I would be paid according to how many leads I produced for him.

At first, this didn’t register, but then I started to think about it. I did the math and started realizing that I could add a decent amount of monthly income to my bank account (decent according to what I was making in those days).

Sometimes just simply doing the math on things can lead you to the right decision.

The important point here: I was never given anything in my life. Everything I ever attained in my life I had to work for, and that included supporting myself during and after college. As a struggling waiter, at the time I needed anything I could find to get my income up. My useless college degree certainly wasn’t going to do it for me, so all I had was myself and my work ethic.

Long story short, the 20 extra hours a week of telemarketing turned into 40, and waiting tables became a weekend-only thing. I got my insurance licenses and started keeping all those leads I was generating, instead of handing them off to this agent’s employees.

Now as bad as telemarketing was, I still wasn’t as miserable doing that, as I was working as a corporate cog in a cubicle. Imagine that for a second, that’s how bad it actually was, so bad that I actually preferred cold calling strangers on the phone, more than I did working for a corporation.

My telemarketing gig, and eventually my insurance sales producer position, was the beginning of a new life for me. They taught me what it was like to be a very low-level entrepreneur: a hired hand, but one that worked on a production and commission basis. The agent I worked for, paid me as a 1099. So I had to learn to take taxes out of my own check.

At the time, this pissed me off, because I didn’t even know what this meant until I was at H&R Block the next year doing my taxes. But to be honest, it was one of the best things that ever happened to me (more on the benefits of being a 1099 later in the article).

After 4 years of this, I realized I might as well get my own agency, so I did. Before this happened, however, I realized that long term, what I really wanted to do was to work exclusively from the internet. I talk about this in detail in this article right here. So I wrote an entire eBook, which I put up on my old blog, and sold a few copies of it. It took me almost 6 months to write, then edit the book, get a cover designed, and then design a sales page for my blog. This all happened while I was still working as a sales producer for this other insurance agent.

It wasn’t until I after I decided to pull the plug on that blog, that I became my own agent, with my own agency.

So as you can see here some of what’s led me here was intertwined, not in perfect order. It will likely also be this way for you too once you get started. The path to success will likely be an intertwined and potentially messy one: 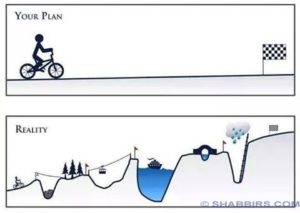 For me, becoming an entrepreneur was a natural progression. Year after year, I was just becoming more and more of who I turned into, which is who I am today.

It may not be this way for you, I suppose it’s possible for you it could be more of an abrupt change. That seems to be less common though however. I have to be honest I don’t see that too often. If you’ve honestly never once thought about entrepreneurship before, it’s doubtful that this article (or any article) is going to be the one thing that changes everything for you.

Who knows, maybe I’m self-projecting onto you guys how I operate, but that’s just my educated guess. The point of this article, is I want you guys to start getting serious about the thought of entrepreneurship if you haven’t already. If this idea is new to you, just go with some of the suggestions I’m going to outline here and hear me out.

It doesn’t have to be anything more than thoughts of entrepreneurship at this point, because if you truly are meant for entrepreneurship, it will happen sooner or later anyway. Be patient too, your thoughts will lead to actions, which will lead to results (maybe not immediate ones). Don’t be haste when it comes to investing your own time and money into something.

TOP 10 REASONS WHY YOU SHOULD DIVORCE YOURSELF FROM WAGE SLAVERY:

1.) Working For A Corporation Is Like An Inverse Lottery Ticket: You Think You’re Winning, But You’re Really Losing.

What are you losing? A lot, read below.

When you’re W2, taxes are taken out of your check before it gets to you. The company decides what they keep, and you get the leftovers. You don’t get many tax breaks, unlike a 1099, who can write off almost anything other than his rent. And even then, if he has an office he works out of in his home, he can write that off.

To read Part 2 of this article, go here.