8.) WORK HARDER ON YOURSELF THAN YOU DO ON YOUR JOB (Better Yourself By Reading &/Or Training Every Day).

The one and the only Jim Rohn said this one. I always found this to be a thought-provoking and interesting statement. The first time I heard it, I wasn’t sure how much sense it really made to me. It wasn’t until recently that I finally started to ”get” what he meant by this.

I even talk about it in part 1 of this article: when your personal life is in order, and you have your personal goals in check (like your health and fitness for example), it carries over into your sales life. People can smell optimism on you, because as cliche as it may sound: it IS contagious. Emotions are contagious, and if you feel good about yourself outside of work, its only natural that you’ll give off a more positive attitude in person. Another thing you’ll have is a clear head, which is immensely important.

Always be making yourself better, always be striving for more product knowledge, more sales psychology, and more persuasion tips. Product knowledge is great, but never forget: you are in the people business, not the car business, or the real estate business, the insurance one, or whatever industry it is you’re in. You are in the business of knowing how to handle people.

How to get them out of their own way, to help them see value, and to overcome their objections when necessary. So its more important that you study sales itself, and persuasion techniques, than it is that you become a nerd about the product you’re selling. The best place to do that, is right here.

9.) BE PERSISTENT, THE SQUEAKY WHEEL GETS THE GREASE.

People have a hard time ignoring people. It may not seem this way if you’re new to sales, and there are always exceptions to the rule, but for the most part people will feel compelled to give you some kind of answer. Don’t be afraid to follow up: most sales are made somewhere between the 5th and 12th contact.

I saw this several years ago, and its just so damn true: 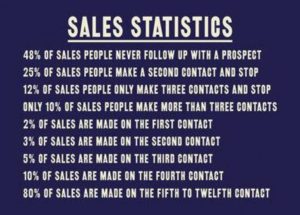 This is one thing I was always good about: smiling and dialing, even if it was my 4th voicemail. I would even put this look on my face that made it appear as though I was looking straight through the object in front of me (like the computer monitor for example) while I was leaving these voicemails. I put a hollow look into my eyes, and with a permanent smile painted onto my face, like I was some unknowing, unstoppable machine, that was just programmed to keep calling and calling. It may sound strange, but you have to start getting un-reasonable, in order to achieve extraordinary results.

Play mental games with yourself to keep it fun, like I did.

You’re either gonna be obsessed or be average, there is no in-between.

10.) THE LESS YOU LEAVE TO CHANCE, THE BETTER CHANCE YOU HAVE.

Just one more reason why you need to become unreasonable. This point, this statement above, is the reason why I’m telling you guys to do these things. Never assume anything, never assume they’re just ”not interested”. Instead: make sure they’re not interested, keep calling until they have to tell you that they aren’t. Make it hard on them, be an asshole. Act almost stupid in a way and forget how to ”take a hint”. I have personal philosophy about sales: my goal is to make everyone either tell me ”Yes”, or tell ”No”.

If they’re too much of a pussy to tell me, when then its my job to teach them how to not be one. Plenty of other people don’t have a problem telling me no, so why should they? Are they grown ass adults? Yeah, no fuck that I say: they are either going to tell me ”Yes”, or they’re going to tell me ”No”. PERIOD. I’m not out there busting my ass every day to play games goddammit, and you shouldn’t be either.

You have to demand respect sometimes from your prospects: be professionally persistent.

The only way to succeed in sales, is to realize sales for what it really is: Life. Your whole life is sales, whether you realize it yet or not. You’re selling something, in one form or another, all day everyday. Whether it be an idea, a decision, a direction, or an action to take. All day, every day, you are basically selling yourself to the world. You have to embrace this fact of life. You have to embrace the concept of sales and what it really means. Until you embrace it, and welcome it with open arms, you’ll have limited success.

If you have any internal negative thoughts towards the idea of sales, then you’ve lost before you’ve even begun. That’s because you not only have to believe in the product you’re selling, but you have to believe in the whole interaction itself, in what it is that’s happening between you and the other person. You aren’t begging or pleading, you’re simply getting the other person out of their own way, you’re breaking down the mental barriers they’ve created in their minds.

The key I’m getting at with this commandment is that this has to be your mental framework, from the very beginning. Embrace the concept of selling and helping other people to see value in things. Its a critically valuable and useful skill to posses in life.

12.) BE SOLD YOURSELF, ON WHATEVER IT IS YOU’RE SELLING.

This one speaks for itself so there’s not much to say about it really. It’s so important however, so its worth including this on the list. You’re not going to sell something to someone, that you aren’t sold on yourself. The only way you’ll ever sell something, without you being sold on it first, is if the product sells itself, and I wouldn’t rely on that.

Remember: the less you leave to chance, the better chance you have.

13.) OWN THE PRODUCT YOU ARE SELLING.

This is the best way to get sold on the product you’re slinging: own it yourself. Put your money where your mouth is. It’s incredible to me, how many people don’t own the products they sell. There’s nothing more hypocritical, then asking somebody to do something that you yourself aren’t willing to do.

14.) TAKE PERSONAL RESPONSIBILITY WHEN YOU LOSE A SALE.

Oh boy, this is the big one.  Most successful, high achieving people, already understand this at a deep level. The problem, is that most people are successful, and aren’t high achieving. Oftentimes, I’d be willing to bet that the reason they aren’t yet successful or high achieving, is because they haven’t learned how to take personal responsibility in their lives.

Most of the time, if a sale is lost, either:

a.) They didn’t trust you enough

b.) They didn’t trust themselves enough to make a decision (still your fault)  or

c.) They couldn’t see the value (or enough value) in what it was you were proposing.

All of these are your fault as a salesman. You have to first get people to trust you, then build value up to such a degree that the product sells itself, or is no brainier. Then at that point people don’t even need to trust themselves, because you’ve built so much perceived value into what you’re offering that its a no brainier.