In my day, I’ve taken everything you can think of: Aderall, Modafinil, Vyvanse, you name it, and I’ve taken it. In college, I managed to get myself a prescription for aderall. It wasn’t hard in those days, doctors were handing it out like candy (still are actually).

While it did have its benefits, for every benefit that aderall gave me, it had just as many bad side effects: dry mouth, comedown (this was the worst), excessive urination, irritability, sweating, fatigue, etc. By the time I graduated, I was so sick of the stuff that I just stopped filling my prescription.

Then I experimented with Modafinil. I’ve even got a whole article on this site covering modafinil right here. I have mixed feelings about modafinil. I wasn’t that impressed with it the last several times I took it. I had ordered about 40 pills and there was just something about it that sort of made me feel shitty. I can’t quite put my finger on it, but if I had to narrow it down I would say that it basically made me feel irritable and anxious.

A constant, all day overall feeling of anxiety just beneath the surface. Doesn’t sound like fun does it? That’s because its not. Modafinil is overrated in my book.

Then I even managed to get Vyvanse prescription a couple years ago. I will say, that out of those 3, Vyvanse was the one that appealed to me the most. Vyvanse is time-released, which is what I needed, and I experienced no comedown on it. The main problem with Vyvanse however, is that its habit forming. Even now, after not having taken it in over a year, I still think about how nice it would be to be back on it.

In other words: I still get an itch to take it.

And no, that’s not a good thing, you don’t want to still feel that way about a pill (or anything) when you haven’t taken it in over a YEAR.

Another complaint I had about vyvanse, was that it made me ”overthink” things. I would write out lists and lists, I would seemingly try to hold onto or document on paper every thought that entered my head. I would write lists for the sake of just writing lists. I found some of these old vyvanse-inspired lists the other day and just thought it myself: ”wow, what an incredible waste of mental energy and focus.”

There IS such a thing as overthinking, and I’ve said this before: too much of anything, even thinking, is bad thing. Its too easy to overthink things nowadays. What you really need to be doing, is learning how to ignore the minutia, and focus only on the 20% of things that produce 80% of your results.

What you need, is something called ”singularity of focus”.

The reason its so easy to get caught up in minutia, is simply because it makes up the other 80% of your day to day activities (that only produce 20% of your results). Yes, overthinking is bad thing.

Too much of something, will have the opposite effect on you.

Gorilla Mind my friends, provides the solution to each and every problem I’ve outlined above.

2.) Is not habit forming or addictive.

And best of all:

7.) You don’t have to give up anything in exchange for what gorilla mind gives you.

It simply gives without taking anything in return (except of course what you pay in dollars for the bottle).

Gorilla Mind is a combination of the following ingredients: 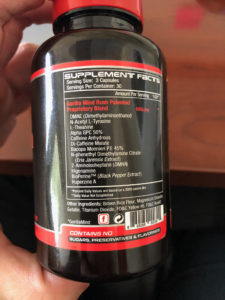 Another incredible benefit to Gorilla Mind, is that it works great as a pre-workout supplement. I will never buy another pre-work powder ever again, I don’t need to, gorilla mind outshines all of them. It also leaves you with no jitters, no crash, and no comedown.

It comes in pill form, so it has no taste/flavor. This means you’re not having to consume something everyday that tastes like toxic waste, or that turns your stomach upside down.

When taking Gorilla Mind as a pre-workout supplement, take 1-2 extra pills than you would to simply to just be productive. In other words: if you would normally take 3 capsules in the morning on an empty stomach, then as a pre-workout, take 4 or 5 capsules.

My recommendation is 4 pills if you’re going to take Gorilla Mind as a pre-workout supplement.

I take 3 capsules of Gorilla Mind shortly after waking and on an empty stomach. One upside (for most people) to gorilla mind is that it will curb your appetite. So you if do intermittent fasting like I do, then this compliments that very well, because it helps curb your appetite until about noon.

I get up at 4:00am every day, and I still don’t eat until shortly after noon (intermittent fasting). Gorilla mind definitely helps me achieve this.

Around 2:00pm, I take another 2 capsules to get me through the rest of the day. If I do this 5-6 days a week (usually 6), then 1 bottle of Gorilla Mind Rush will usually last me about a month, unless I have a few days where I take 6 capsules instead of 5.

This product has a time-released sort of effect to it. With an early morning 3 capsule dose, and an afternoon 2 capsule dose, you’ll be feeling Gorilla Mind all the way until the end of the day (into the night hours).

Don’t take it too late in the day, or you may have trouble falling asleep.

And if you’re sensitive to caffeine, then you might want to try Gorilla Smooth instead.

Gorilla Mind may have a subtle effect if you’re taken harder substances like the ones I described at the start of this article. This is how it was for me when I first started taking it, but just give it time. The more I take this product, the more I prefer it over Vyvanse.

I haven’t noticed it to be habit forming either, there have been 2-3 weeks blocks in between bottles and I’ve been able to go onto and off of it with no issues (unlike Vyvanse where its immediately noticeable the day after you come off it).

I can sit here and talk all day about Gorilla Mind, but until you try it you’ll never truly know what you’ve been missing all this time, order yourself a bottle here and find out for yourself.