In your 20’s, especially if you live in a big city, oftentimes young men can get sucked into the nightlife scene. I know because I was that young man, and so were several of my friends.

Dallas, much like New York City, Las Vegas, and Chicago, are giant adult playgrounds. There are never ending bars, pubs, nightclubs, and formal balls. When you’re in your early-mid 20’s, especially if you were in a fraternity in college, this is a trap that’s all to easy to fall into.

Don’t be fooled, its nothing more than just that: a trap and an illusion. After graduating, many young men will feel a heightened sense of accomplishment, a feeling that they’ve ”made it”. They’ve graduated, they’re in the big city, and now they have that corporate job with the 401K.

Making more money than you did in college also helps add to this illusion.

The illusion of grandeur can be driven home further by those closest to you (your friends), who will try to paint the illusion for themselves as well.

Now I wont lie, Dallas is a fun city, with some of the hottest women in the country walking around everywhere you look, but sooner or later the buzz will ware off. You wont get tired of looking at the beautiful women, but you’ll get tired of everything else.

Here’s my problem with all of that: What exactly is there to celebrate? Being alive?

There are better ways to celebrate being alive that don’t involve constantly soaking up your body with alcohol. These men have not ”made it”, despite the lies they may tell themselves. Working as a corporate cog in the wheel, and taking orders from a ”boss” or another man, most definitely does not mean that you have ”made it”. 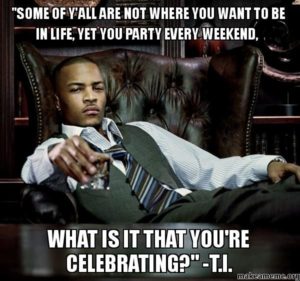 I used to think that having a girlfriend was the wrong move. That she would do nothing but distract me from work, from getting my goals accomplished, and would drain my wallet.

For YEARS I felt this way, purposely keeping myself single to avoid those fates. While it is true that dating the wrong girl will do exactly that, what I failed to realize was that those things only happen when you’re with the wrong girl.

Dating the right girl, one that is supportive and encouraging of your mission, is the way to go. It may take you a little while to find her, but once you do it will free up your mind and energy to focus on the things that really matter: business, and money.

For years I fell for the ILLUSION that dating around, and sleeping with all kinds of girls was the optimal way. Going out with the boys on weekend nights, only to wake up with a hangover the next day.

While a night out with the guys is important every now and then, it should not be the norm, and should not be something that’s happening every weekend.

Unless you posses and unusually high degree of self discipline (most guys don’t, don’t kid yourself), then its going to end the same way every time: with you oversleeping the next day, losing hours of productivity, your money, and the energy to take care of business because of a hangover.

Lets face it guys: 8 out of 10 times that’s whats going to happen, stop kidding yourself. This is a very dangerous illusion because it can last for years before you wake up and realize what has been happening.

Your goals and dreams are getting hijacked in favor of drunken nights out on the town. I see it with other guys, otherwise ambitious guys who are already entrepreneurs even, but don’t realize they’re holding themselves back from where they should be.

They’re desire to be Mr. Social means keeping up appearances 3-4 nights a week, usually Thursday through Sunday. All the while blowing your money on drinks. Of course all this gets posted to social media and is justified to themselves that they are ”building their brand”. Sorry to break it to you pal, but that is NOT how you build a brand. You just tell yourself that to justify being irresponsible.

I DO think in your early 20’s there needs to be a year or two where you should have your fun and get it all out of your system.

Even then however, there are better ways to do it. For example, what you really should do is save up as much money as you possibly can between the ages of 16-22, then go on a trip around the world. Take a year out of your life and go travel all around the globe. It is an experience you will never forget and will definitely never regret.

You can bed women from all over the world, and even some that don’t speak english. How’s that for sowing your wild oats?

Die with no regrets, you’ll thank yourself for it on your deathbed.

And it will teach you a lot about yourself in the process. If you don’t take the world tour route, then I still think living in major city for a couple years in your early 20’s and embracing your social life, is the right move.

If you neglect it, you’ll regret it in your in your 40’s (because you didn’t get it out of your system), and we’re trying to avoid regrets remember?

It’s worth repeating that it is important to sow your wild oats, have your fun, embrace your social life, and have those experiences. I don’t regret that about my life, what I do regret somewhat was that I started too late (mid-late 20’s), and it lasted too long.

I should have buckled down and gotten serious about business and a brand sooner than I did. It’s not a mistake I can’t overcome, but if you can avoid making the mistakes I did in the 1st place, then AVOID THEM.

Age 25 is where it should change for you. Everyone’s a little bit different, but on average age 25 needs to be where you get serious. By serious, I mean of course get serious about building a business and a brand. Get serious about your mission.

Smarten up fellas, take an honest look at your life and those closest to you. Are they urging you to come out and drink because its in your best interest, or because its in theirs?