Years ago, I dated a mentally unstable girl. It almost ruined my life. This almost ended everything for me, and my life was in shambles afterwards. I felt I needed to write this article to help you notice the warning signs, so you can spot it now if you’re headed for your own toxic relationship.

Hopefully you’re not, but if so, this article should warn you on the impending doom that lies ahead.

I’m here to tell you my story was not an isolated case. It happens all the time, everywhere, and everyday. It is happening right now somewhere. Men everywhere are realizing they fucked up. Realizing they stepped into a pile shit without looking. What I aim to do here, is to give you the top 10 signs to watch out for, in the first 2-3 months of dating a particular girl.

That isn’t to say if you’re in deeper than that you cant still use these signs, and start planning your exit (escape).

2-3 months however (for the most part), is still an early enough timeline that you can get out with your soul still in one piece. Without further intro, lets begin:

Toxic Relationship Indicator #1: Pay very close attention to how does she describes her past (romantic) relationships as well as platonic friendships.

Do you spot a rocky, unstable history of both relationships and friendships. Pay especially close attention the time period after her high school years especially. I have found that, for whatever reason, even very unstable girls can maintain longer relationships at a younger age (in high school), than they will year afterwards.

I think this is due to two reasons:

1.) As she gets older she gets worse and,

2.) The men she dates are harder to fool at an older age, than they are in high school.

Toxic Relationship Indicator #2: How does she describe her childhood? Was she a chronic troublemaker with stories of strife between her & her parents?

The woman I had dated had a tumultuous history with her parents and stories of being one hell of a troublemaker in her youth. She did not hold back in expressing the intensity of her overall childhood, and told me her dad had slapped her one time for getting too out of line. She told me: ”After everything I had put him through, I just deserved it”, all the while shaking her head at the memories of whatever the hell she was talking about.

My friends, if that’s not a red flag, I don’t know what is.

I wouldn’t have seen a red flag even if it had walked up and punched me in the face.

DO NOT make this same mistake. Women will make your life hell, but the interesting thing is most of them will do the common courtesy of giving you all the signs of this beforehand. Its your job to recognize these signs.

Toxic Relationship Indicator #3: She’ll start mentioning to you how much she dislikes your friends, how you are ”too good” for them, & starts suggesting they are holding you down.

This, like with most points on this list, will start subtly. But these comments (most likely) will eventually come. When they do, take notice of them. This is tactic designed to start isolating you from your friends. She’ll start turning you against them.

Just like Senator Palpatine did with Anakin Skywalker, she’ll make seemingly harmless comments like this to start her scheme of isolating you from reality. You see, chances are, your fiends will notice there is something off about her. They will notice she is not good for you. And when they do, they’ll start to tell you.

You’ll be heavily resistant to their advice at first, but after time you’ll start to wonder, and she knows that. She’s seen this happen before in her relationships before you, so this time she’s ready.

Therefore this move is underhanded play on her part to start skewing your perspective.

Toxic Relationship Indicator #4: Will start lowering your self-esteem through (subtle) jabs at your masculinity.

There are two reasons why a mentally unstable woman is doing this:

–The first is because she is insecure, and insecure people in general are shit talkers, men and women. They cant help themselves. Their outer hostility and rudeness is a reflection of how they feel about themselves on the inside. It’s a self-projection.

–The 2nd reason is because she is shit testing you. All women, sooner or later, will shit test you. However some women will do this far more than others will. The women who shit test more often, are the ones with trust issues, daddy issues, and have higher than average need for drama in their lives. 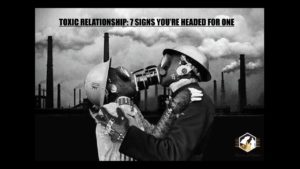 Sometimes, this one is actually the last one that will reveal itself. It will just depend. Women are extremely good at hiding who they really are in the ”dating phase” of a relationship, especially a dangerous and/or crazy one. Keep your eye out, for that first overly emotional outburst from her.

If she’s the type of girl I’m describing here, trust me it will come. When it does, and it happens after you’ve started to notice other points on this list, then RUN. Do not walk: RUN! You’ll either be glad you did, or you’ll regret that you didn’t.

You’ll look back at this moment, as being the point at which you should have gotten out.

Toxic Relationship Indicator #6: Months after getting into the relationship, you look back & feel tricked at her gradual behavioral changes.

The girl she was in the first 1-2 months, is nothing like the girl you’re with now (which of course is who she really is). The change is usually gradual , although in some cases it can be more of a hard right turn.

Mine was actually more a hard right turn.

It started when one night I wanted to take her out to dinner, because I hadn’t done that yet. For whatever reason, she completely misread this gesture and saw it as being something I felt like ”I had to do”, instead of something I genuinely wanted to do. For the first time since I met her she started to act a little moody at dinner that night, like she wasn’t having the best time.

This started to slowly piss me off inside, even though I didn’t realize it. We went for a drink somewhere else afterwards and my brooding bad mood started to show, and got to a point where I couldn’t even fake a good mood. This resulted in our first fight.

Months later, when I looked back at this night, one thing became clear to me:

She had created drama (albeit very subtly) out of nowhere, when there was absolutely no need or reason for it.

This ended up being largely tied to her insecurity issues, which I didn’t realize at the time even existed.

And so: the drama of what eventually followed was born out of this experience.

I was 2 days away from asking her to be my girlfriend that night. What followed this tiff was her going to a charity event ball with another guy, and plastering pictures of it (her and him) all over Instagram.

I am mentioning this last point because this also marked the 1st incident of a repeating pattern she would continue to exhibit every time we had a serious fight: running off with another guy, in some form or another.

Again: more red flags than a communist parade, and I ignored every, single, one of them. Do not ignore her attempts to show you who she is. Always remember: when someone is showing you who they are: LISTEN TO THEM!

Another thing to watch out for: Early on, a girl like this will often casually mention sexual comments to you, that would never leave her mouth under the current dynamic you now have.

This is a trapping strategy, that she may or may not be consciously aware of. She says these things to make you think she’s more sexual or experimental than she really is. Most women know that modern men today want a freak in the sheets, and this is one way they use that knowledge to better their secure their hold on you.

Toxic Relationship Indicator #7: She will continually play on your emotions by ”push-pulling” you. Often with nice gestures, cards, & small gifts thrown in to confuse you.

As things got worse over time, and arguments and fights erupted, she would mess with my head by buying me cards and little gifts. These were calculated moves she made. She definitely knew what she was doing. This woman in particular, had a unique ability to really mess with a man’s emotions. The reason I knew this was because of comments and stories I would hear my friends tell me, about previous men this girl had dated.

They fell prey to same games and manipulations that I did. It were these small gestures from her, that would mess with head in those emotional moments of confusion, when I would question trying to get out of the relationship.

Summary (& the main points to keep in mind here):

-If you feel like she is slowly isolating you from your old friends, ask yourself why you feel that way. There’s a reason for that.

Pay attention to an underlying feeling that you’re dying a slow death. This is how I felt throughout most of the relationship. Not every minute, but often enough to where I definitely noticed it. One big reason for this was because I was gradually becoming less ambitious towards my dreams and life goals. I was watching them, almost uncontrollably, slip right through my fingers, like sand.

Are you sleeping in more? Drinking more? Are you sometimes having crazy thoughts?

Often you’re mentally and exhausted from the emotional roller-coaster you’re going through every day with her. This results in you never having the time, inclination, or the energy to work on your side mission (which is usually the future dream that you’re aiming for).

This girl has essentially been your dream killer.

You likely feel disconnected from yourself, which often results in depression. The sad truth, is that what I’m describing here, will happen to a lot of men. When their toxic relationships finally end, they’re then unable to recover to their old selves. Their previous self image, which included their self esteem, self-confidence, and excitement and motivations about the future.

This isn’t even to mention their banks accounts have also very likely been largely drained by this woman, and all the months of time they lost. Weeks and months of time that they’ll never get back.

They already isolated all their old friends. So they are left with nothing. And its in this sad state, when it appears to them that all is lost,

That many men make the fatal mistake of ending their lives.

They’ll put both barrel’s of a shotgun to their mouths, or hang themselves in their bathroom.

You have to cultivate your own identity, and it has to be so far rooted into the ground, that no woman can come along and ever uproot you.

Cultivating a healthy identity and life for yourself, will also help you avoid ever getting involved in a toxic relationship the first place. Always remember: listen to your gut, and never confuse what your emotions are telling you, with what your gut is telling you.