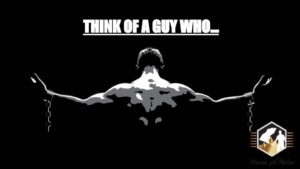 Readers of my blog are here because they want more out of life.

They want to become more, to achieve more, to BE more.

I personally have been this way all my life.

I’m lightyears ahead of where I was five years ago.

I’m even lightyears ahead of where I was three years ago.

Every year, every month, week, and day, I’m getting better and better, and better.

If you’re not happy with your life right now as a man, then I understand you.

Although I’m much happier and more satisfied today than I was three years ago, I still want more.

I want more for my life just like you do. I always will.

I knew so many people growing up, that squandered their potential.

They threw it all away, flushing it completely down the toilet.

So all this being said, I want you guys to think of a guy.

As you consider these next five points, try to picture yourself as possessing these qualities, in your mind. How having them could change your life. How they could mold you into the kind of man you want to become.

One thing I’ll tell you is, as a man in the year 2021, you MUST possess something called self-discipline, as well as self-control.

They are two sides of the same coin. Many people often even use the terms interchangeably.

I see them as being closely related sure, but fundamentally different.

Without these two (the Holy Grail of manhood), then you literally have nothing in life.

These two lay the foundation around which the rest of your life is built.

I wanted freedom of location, and to a large degree, I have that now.

I’ll truly have it once I’m fully financially independent, but right now I have about 80%.

Most men, by contrast, are still chained to a location. I no longer am, thanks to the work I put in between the years of 2016-2020.

I have all these now and more.

I’m just like you were. I wanted more, and I took more. I took more so that one day I could give back more. That’s what I’m doing now, and I’m just getting started.

Mission Life Motion is going to be around for a looonng time.

If you’re currently a guy who doesn’t possess all this (if you currently have nothing), or you’re just a guy aspiring to become the man you want to be, then all hope is not lost.

Hope will always be there, just like potential is (often) there, but neither of them mean much until you do something with them.

You are where you are right now for a reason: because it’s where you want to be.

If it’s not where you truly wanted to be, you wouldn’t be there. You’d be working day and night, with your wheels constantly turning about how to fix your situation. You’d be acting, every day, on your plans to change your life.

If this is not what you’re doing, then you haven’t made your decision.

You haven’t made your decision for Christ.

No, this is not a popular opinion, but that doesn’t mean it’s wrong.

Sometimes you need a kick in the fucking ass, and I’m here to give it to you.

You’re welcome by the way.

Before you can live the good life, you’ve got to ask yourself a question…

Are you ready to dedicate yourself?

Are you ready to marry yourself to the game? Playing the game won’t be enough. When you play games, sometimes you lose, and you can’t afford to lose, can you?

No, you’ve got to marry yourself to the game.

The definition of marriage means you merge with something else and become whole with it. If you took a glass of Coke, and a glass of Pepsi, and merged them, can you then unmerge them?

No, you can’t because you’ve married them together. This is what it needs to be like with you and whatever it is you’re trying to do. This is what it means to be dedicated. To be committed.

There is no better program out there for fixing your self-discipline than this one.

I highly encourage those of you who are struggling with this first point here to consider getting Harsh’s program.

This isn’t a concept I see discussed very often on men’s improvement blogs.

It’s pretty simple though when you think about it. If you’re not happy or at least relaxed during most hours of the day, then every important decision you make is filtered through that unhealthy perspective, that unhealthy lens.

Hell even being too happy, too often, clouds your judgment.

Emotions in general, cloud your judgment.

They fog up your mental windows so you can no longer see through them.

This is why men were able to build civilization up to what it has become.

Men built civilization because they aren’t ruled by their emotions.

At least they weren’t for millennia. In the last 50-60 years, this has unfortunately started to change, and I have no idea what that means for our future.

That’s a topic beyond the scope of this article, however.

Your baseline emotional state should be stoism, relaxed, and (generally) happy. When I say ”happy” here, what I really mean is grateful.

Be grateful for what you have.

If you do can that, you’re more likely to be happy. All too often we get caught up obsessing over what we don’t have, to the point that we forget what we DO have.

Being grateful and appreciative of what you already have, is critical to obtaining that which you don’t yet have.

As far as being relaxed is concerned, I highly encourage you to check out Kratom, as well as Phenibut. Especially Kratom as its done wonders for helping me put money in my pocket, work 15 hours a day in a relaxed state, and get more done due to increased focus levels.

Phenibut helps more with social lubrication (specific anxiety), and Kratom helps more with focus (general anxiety). Don’t take these however if you don’t have self-control (see #1 up above).

Those with addictive personalities (poor self-control/restraint), should ignore Kratom and Phenibut.

They aren’t that addictive, but people with overly addictive personalities get addicted to everything it seems so…better to just forget them.

3) Is in incredible physical shape ALL year:

This might not be the case right after you first lose weight (if you just lost a lot of it), but after a while, this is where you should default to.

I maintain a body-fat percentage of 10% all year round.

About twice a year, I’ll do a couple of cycles (usually Primobolan or SARMS), and I’ll drop that down to 8%, but 10% generally my baseline.

Unless you’re an endomorph, then there is no reason, as a self-respecting man, that you should carry more than 10-12% body fat throughout the year.

Honestly, if you’re truly a man chasing excellence you should really never be over 10-11%.

Unless you just returned back from a vacation or a holiday trip.

Every time I know I’ll be going on vacation, or have the holiday season coming up, I’ll purposely drop my weight down about 3-5 lbs. from where it normally resides.

This way when I cheat like crazy during the trip, I only end up about 1 or 2 lbs. above where I usually am.

If you’re not an endomorph, and you have trouble staying at 10-11% body fat year-round, then you’re slacking on #1 again up above (self-control), and you’re likely eating too much crap.

Endomorphs gain weight very easily, so I’ll go a little easier on you guys. If you are one though just make sure you’re aware of it.

We all have to play with the genetic cards were dealt.

4) Has his money work for him, not the other way around:

Once you’ve gotten your shit together…you can start operating on a higher frequency level.

No longer will you be concerned with such base-level needs like self-control or self-discipline.

Once you’ve ”graduated” so to speak, you can now start to focus on things like investing and having your money go to work for you. Your money is not doing you an ounce of good just sitting in a bank savings account.

On top of that, banks are some of the most de-generate types of entities you can affiliate yourself with. If you are going to associate yourself with such scum, at the very least associate with a Credit Union or a small local bank.

One that hasn’t gotten corrupted yet.

Otherwise, you’re better off de-regulating your money under Cryptocurrency, OR buying tangible assets like Gold, or Real Estate.

When it comes to Crypto and these ”big-name” banks, most of you guys really have no idea what kind of De-Gen, crazy volatile moves they’re are making behind closed doors.

They know there are no real consequences to their actions, they know they’ll just get bailed out if they make a bad move.

They know more fiat currency can just be printed off like paper.

No, I wouldn’t trust them as far as I could throw them.

The point is: the U.S. dollar already is barely worth the paper it’s printed on, and it will be even less so in the years and decades to come.

Hyper-inflation IS coming, there is nothing stopping it now.

The Government took too many hits off the paper-printing needle, and now the consequences are inevitable…

What your dollar is worth today, is not what your dollar will be worth a year from now, and definitely not 4 years from now. Inflation has been around for decades of course, but it’s about to get A LOT worse.

If it is, then you’re either young, or you’ve been hanging around the wrong people.

5) Lives a life of abundance & options:

Freedom is something men inherently are wired to want.

It’s born into them, into their genetic coding.

A fundamental characteristic of masculinity is to pursue freedom. Freedom comes in several forms. Here are the freedoms that I aspire towards at this current time in my life:

Having options, on the other hand, means having ”leverage on life.”

It’s essentially a culmination of everything I’ve been discussing here. You don’t have freedom until you first have options…

Having options of course depends on what we’re talking about.

Are talking about options with women?

Are we talking about options with money?

Or options in a more general sense?

This article has been more focused on money and motivation, so let’s focus on that one. To have options with money, you need to possess money.

You need to earn it.

There are a million ways to do that, especially nowadays. There are so many actually that they’re almost too many.

Money won’t solve ALL your problems, and sometimes it even amplifies them, but it sure as shit makes them easier to confront.

When you’re preoccupied with money and how to get by, you’re stuck at the bottom of the pyramid.

You’re never able to ascend up and concern yourself with higher-level needs.

There’s one thing money does that’s extremely important to our topic here: it gives you leverage. Having leverage means you have options.

When you have options, you have freedom, and you usually also have abundance. It means you have full control over your decisions. Everyone has some level of control over their decisions, but only the truly free have FULL control.

Did you think of yourself when reading this article?

If you didn’t, then you’ve got work to do…

P.S. Below is an excellent book that helped me tremendously.

In addition to what I discussed here if you also struggle with:

– Indulgence, saying ”yes” too often instead of ”NO”.

– A lack of discipline.

– No self-control (or not enough of it).

This book (Audiobook included) will TRANSFORM your life, forever, in just 90 days. 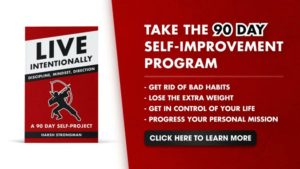