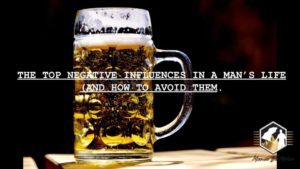 There are always elements at play in our surroundings, that are having an effect on us.

Everything is having an effect on you, whether you want it to or not.

I’ll also offer suggestions on the steps you can take to avoid them, or at least mitigate their influence on you.

Some of these influences are everywhere, so some of them will be hard to completely avoid. Regardless, just being aware of them, is a huge first step in the right direction.

Without further ado, let’s get right into it:

This one is huge. Alcohol has become so widely accepted, that its harmful effects are often overlooked or ignored. It has become so largely associated with social activities, that its true impact has been masked.

Its very easy for some people (many people), to let alcohol get the best of them. In other words: the alcohol takes on a life of its own and uses your body as the vessel to carry out its anarchy.

When you drink alcohol, you’re playing with fire, and when you play with fire, more often than not you’ll get burned. There are very few people, who have the ability to have a couple of drinks, and then just stop. If you’re one of those people, then more power to you, but just know that you’re in the minority.

Drinking in excess of two drinks will never result in a positive outcome. If you think otherwise, well then you’re just buying into the illusion that alcohol tricks you with. The alcohol is like the devil in sheep’s clothing. The devil will not appear to you as the devil, it will appear to you as something likable, approachable, and friendly.

I could go on and on and on about why alcohol is bad for you, but I’ll save that for a future article. Just always keep in the forefront of your mind, that: alcohol is one of the most common negative influences that prevent men from reaching their goals. It’s very sneaky, and you have to be extremely careful with it.

I don’t have a whole lot to say about this one, other than the fact that I just don’t think pharmaceutical drugs are good to be taking. There are far, FAR too many people on pharmaceutical drugs these days. It’s big business, and because its big business, that should give you an idea as to why there are so so many people taking prescription medications.

This is not a coincidence: there is A LOT of money involved, and a select group of people are getting VERY rich off the pharmaceutical drug business. I’m here to also tell you that there ARE alternative solutions, to what many believe can only be solved with medication.

One example of this is ”anxiety”. Many people would have you believe only a drug like Klonopin or Xanax could solve anxiety, whereas a great solution could instead be to take Kratom.

Xenoestrogens are responsible in large part, for the rapid decline in testosterone that we’re seeing today. These are man-made chemicals that mimic estrogen in your body and impact your hormone balance.

Xenoestrogens are hurting men and women both, but hurt men specifically in their testosterone production.

Here are the top 10 food sources of xenoestrogens:

So what does all this mean?

-It means you should stop buying water in plastic bottles. Since you also shouldn’t drink tap water, then this is the water filter that I and Dr. Mark Hyman recommend.

-Start buying all your food from a local farmer or rancher. Do not buy food that has a label on them. In other words, try to avoid buyinging foods with this on it:

-NEVER eat good containing soy, and don’t use soy or Worcestershire sauce. Wave goodbye to them, forever. Those sauces are now part of your past.

Marijuana is even sneakier than alcohol is. Although marijuana won’t damage your liver like alcohol will, and affects you in different ways, it’s not a good influence on you. I believe people know this deep down about weed, but many of them try to overlook it (and do a pretty good job of overlooking it).

I’ve personally never been seduced by the weed drug. What I mean by that is it’s just never been my kind of buzz. I was always more prone to being tempted by alcohol than I was by weed.

I don’t like to feel self-conscious, and I don’t like the feeling of paranoia, both of which I would often feel when under the influence of weed. People respond differently to it, but the bottom line: is that it’s just not good for you.

I think you know that already internally.

I’m just here to tell you the inner voice that’s telling you that, is right.

A GMO is an organism that has had its DNA altered or modified in some way through genetic engineering.

It is the result of a laboratory process where genes from the DNA of one species are extracted and artificially forced into the genes of an unrelated plant or animal. The foreign genes may come from bacteria, viruses, insects, animals, or even humans. 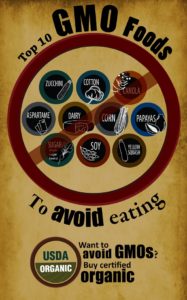 6 Steps to Avoid GMO Foods at your local market:

So how much of our food is genetically engineered?

In the United States today a huge proportion of the most commonly grown commodity crops are genetically engineered: 95% of the nation’s sugar beets, 94% of the soybeans, 90% of the cotton and 88% of the feed corn, according to the 2011 International Service for the Acquisition of Agri-biotech Applications report.

Here are two steps towards reducing your exposure to HFCS, and sugar:

-HFCS contains contaminants including mercury that are not regulated or measured by the FDA.

Mercury is a heavy metal and is extremely harmful to your body.

Soy can interfere with thyroid function, which may affect your metabolism. It also contains phytoestrogens (sometimes called xenoestrogens), which are chemicals that can mimic estrogen in your body.

Soy contains two primary phytoestrogens: daidzein, and genistein. Both of these compounds are known to disrupt your endocrine system. These and all estrogen compounds are classified as isoflavones.

Isoflavones are estrogen mimickers that increase the level of estrogen activity in your body.

Soy has also been linked to lower sperm counts in men.

”While the most acute exposures to harmful levels of electromagnetic radiation are immediately realized as burns, the health effects due to chronic or occupational exposure may not manifest effects for months or years.”

EMR is measured in milliGauss (mG). The Environmental Protection Agency recommends that you limit your exposure to 0.5 mG to 2.5 mG. When you are just 3 feet away from a microwave, you are exposed to up to 25 mG.

How can you reduce your radiation exposure?

Here is an EMF Detector you can order that will help you mitigate the level of EMR exposure you have.

This one shouldn’t come as a surprise to you. Negative, toxic people will always rub off on you if you’re in their presence for too long. You should become very good at detecting red flags people give you with regard to their negativity. Sometimes it’s not so easy to spot a negative person early on. This is because some people are good actors, and are usually on their best behavior when you first meet them.

The much more common problem is that you’re already surrounded by negative people. Your past decisions have to lead you to where you presently are. So the more likely issue will be that you need to find a way out, and a way to get away from these people that are dragging you down.

They’ve probably been dragging you down for years already by the way. It’s time to wake up and become aware of what’s been happening to you.

The media has been corrupt for years. It’s recently become VERY increasingly corrupt.

I’m going to make this very simple for you: Just about any and everything you see advertised on the following news networks, is fake and driven by an ulterior motive: CNN, the New York Times, ABC, CBS, NBC news.

Don’t listen to anything they tell you, because it’s all a lie. All of it. These stations get away with murder and I’m sick and tired of it. 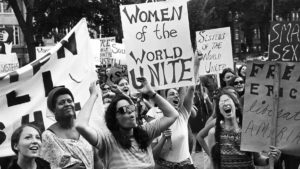 Without a doubt the most toxic, undercutting, malicious, malignant, hateful, poisonous garbage movement that we’ve ever allowed to happen. Feminism is corrupt, and it’s been that way from the very beginning. They want you to believe it’s about equality, but that’s just the cover-up. Feminism is ruining the fabric of our society and is pushing us towards extinction through androgyny.

It is a very dangerous, influential force that has brainwashed a lot of people.

They’ve even flipped the script, and convinced people to believe that there is such a thing as ”toxic masculinity”. It’s really a brilliant move on their part if you think about it, they flipped the script back on men before they were about to be exposed, in an effort to turn everyone’s attention in the opposite direction. What’s really toxic, is the feminist movement itself. That’s where the real toxicity is.

Masculinity is the opposite of toxic, but that’s exactly what they want you to believe it is. 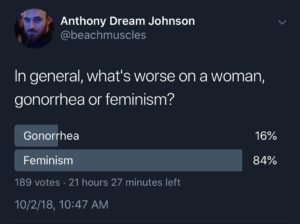 We are at an interesting point in human history. The divide between the right and the left is at an all-time high. This divide started with the radicalization of the left, which happened years ago.

Liberals and socialists (which are basically the same thing), want to see the death of capitalism. They want an equal redistribution of wealth. They want everyone to be the same, and no one to be different or unique. These are sick, severely misled, mentally ill (in most cases), and damaging people. You must avoid them at any and all costs. You must cut off all communication with them.

Your constitution must be firm, unbreakable, unmalleable, harsh, cut-throat, ruthless, and unforgiving.

Whether you want to admit it or not, every minute you spend in the presence of these sick people, you are being influenced. You are being manipulated. Liberals are covertly pushing their agenda onto you. They are doing everything they possibly can to censor you, and silence you.

They want the death of masculinity and are pushing us towards androgyny. I’m cutting right to the heart of the matter here. You’ll have to uncover a lot of crap to come to these truths. I’ve already done that. Maybe you have, and maybe you haven’t yet.

They will disguise it as equality, but that is just a ruse. Most of these people have become so brainwashed that they now believe this ruse.

If you truly care about your life, your future, and even those close to you, then you’ll take these points seriously. You know deep down, that these influences are not good for you, or for those you care about.

You know they are having a negative effect, whether they’re physical or mental.

It’s time to wake up and start taking corrective action towards eradicating these from your life.

How And Why You Should Avoid GMO Foods (Quick Consumer Guide)

How to Reduce Radiation Risk