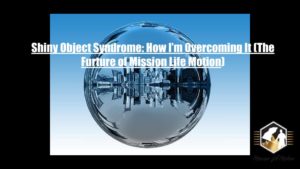 Today’s article will be a bit different. I wanted to send everyone on here a quick update on what’s going on.

I’m going to tell you how all this relates to you further below (and why I’m even telling you all this in the 1st place).

It’s recently come to my attention, that I fell victim to what’s called ”Shiny Object Syndrome”.

My goal with you guys, my promise to you: is that I will always be honest with you.

I mean this in more ways than one. I mean this in every sense of the term, including matters (especially matters), that involve me personally.

It was Jon Anthony from Masculine Development that brought this to my attention.

Ever since I moved abroad, I have engulfed myself in Mission Life Motion.

In other words: I’m now devoting ALL of my working attention to it.

Which is a good thing, especially since this is the main reason I left the United States.

I needed to get away from all distractions and go ”all-in” on this new internet business of mine.

What’s NOT a good thing however: is how I went about it.

Since August, I’ve been attempting to:

1.) Write new articles (with little success, this one has suffered more than everything here)

2.) Go back and fix cosmetic and un-optimized parts of my blog.

And I was actually attempting to do all these consistently (I know).

The point is: I fell victim to the modern-day trap of trying to do too many things at once.

It came SLAMMING home to my attention a few days ago, that this has been a colossal mistake I’ve made.

When you have a brand, it’s not bad to have it spread over different platforms at all.

In fact: diversifying is actually very smart (in case I were to ever get banned from one platform), however in the beginning: diversification is actually counter-productive.

In the beginning (which I’m still in even at this point, due to only recently being able to go full time with it) diversifying will hurt more than it will help you.

Don’t believe me? Do your research into what you lose from ”switching costs” as it relates to your time and energy levels. You’ll be astounded at what you learn about it.

”Switching costs” are the same reason why you should never start 2 businesses at the same time. Same idea, same principle.

It’s not that I can’t or won’t bounce back from this of course, but it IS going make it seem, like things are slowing down a bit.

I can assure you: they’re not.

Things are not always as they appear. Never forget that.

I’m simply in a situation where I need to slide my attention over to optimizing MissionLifeMotion.com for the better part of 2021.

If you watched the video I emailed out Monday, then you already know I’ve invested a lot time and energy into growing on Twitter.

Here’s what this is all boiling down to:

Any part of Mission Life Motion, that is not symbiotic to these two (the blog and Twitter), I’m going to have to put the breaks put on (for now).

”Symbiotic” for those who don’t know, means two things that complement each other.

YouTube is an entirely different and separate skill set than writing is.

What does this mean for you?

What this means for you guys, is the following:

1.) Updated content (articles) several times a week. I will be going back through many of old articles and making them better, some I may even rewrite entirely. As I do this, I will email out the revisions every other day.

(I’m already kind of doing this)

I will however, still email these out to the newer subscribers that haven’t read them yet.

Every day I’m tweeting out 7-8 new tweets a day (in addition to retweeting my older, more popular ones). My best tweets will soon be getting turned into brand new articles by the way.

Around March 15th or so, I am going to aim to write 1 new article every day. This doesn’t mean I will, but I’m going to aim for it. That being said: around 3/15-4/15 you can expect the emails to increase in quantity.

(this was going to be daily, however as I’ve outlined above, I need to devote more time to actually writing new articles and making the blog as good as it can be)

Yes, I’ll still at least do 1 video a month.

Another thing that’s factoring into this decision: is the fact that my YouTube subscriber list is now growing by itself (I get about 1 new subscriber a day).

While this isn’t a ton, when you combine it with 1 new video a month I’ll do now until October, it’s just enough runway to get me there without compromising the channel.

Again: YouTube is the one part of MLM that will have to suffer (temporarily).

It’s my hope that by September or October, I will be able to resume the Livestreams (this time after guest appearing on several other Livestreams/podcasts 1st, in the weeks beforehand).

This is for the greater good of Mission Life Motion, and ultimately: to all of you.

You will all end up benefiting from this temporary change in the long run.

It may not seem like this at first, but with time: those who follow me closely will realize what I did (in hindsight it will make sense).

Hopefully, by the 4th quarter, I can resume both the Livestreams and the normal YouTube vids.

Why am I telling you all this? Well other than what I said at the start of the email (about being transparent), I want to lead by example.

I want to show you guys, how NOT getting sucked into Shiny Object Syndrome, will pay off in the long run.

Sometimes in order to take 2 steps forward, you have to take 1 step back.

This is what being an entrepreneur is all about: being able to quickly pivot, adjust, and adapt.

MissionLifeMotion.com has been unfairly neglected, and I’m going to change that. Mark this date, you are about to see MASSIVE improvements here on this blog, from this point forward.

A year from now this blog will be almost unrecognizable to what is now (in a good way).

In conclusion: the last YouTube Livestream this Saturday, February 13th at 9:30am Central US time (10:30 EST).

Thanks for reading guys.