Let me guess: You’ve recently broken up with your girlfriend. She’s moved on, probably dating another guy already and maybe even flaunting it all over social media.

You’re devastated, broken, confused, depressed, angry. Scrolling back through old text message feeds, seeing heartfelt messages she sent you professing her love for you and how happy she was that you came into her life.

You wake up in the middle of the night haunted by the memories, by the empty space next to you in the bed. You just feel like giving up, like there’s no point to life because this will ‘’probably just happen again with the next girlfriend’’. 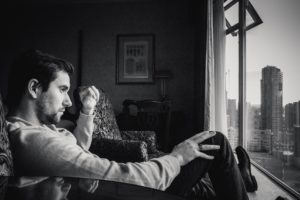 You question whether you are cut out for relationships in general, because it seems like they always end very similar to this. Maybe you send her a drawn out, needy, sappy text. And that’s when the real dagger to the heart comes, she coldly replies saying:

Or something similar to these.

You feel embarrassed, humiliated, like you never meant anything to her, like the whole thing never happened and she moved on at the drop of a hat.

Your worst fear came true. In the back of your mind, the whole time you were with her, you feared when the day would come when you’d receive those texts from her.

Maybe the fear of it was so potent it even woke you up in the middle of night. You laid there in bed thinking: ”After all, this has happened before and am I strong enough now to avoid having this happen again?

Well it did, you pushed another girl to that point. You attracted into your life the EXACT scenario you were afraid of. It became a self-fulfilling prophecy.

Well unfortunately it usually gets worse before it gets better and here are some common reasons:

–You feel an incredible amount of guilt. This is more common if you felt the girl really, truly liked you, and wanted things to work out between the two of you. In other words: in the beginning, she liked you more than you liked her, and knowing this is where the guilt comes from.

–You’re addicted to the chemicals your brain releases when you feel depression. This may sound strange but its true. Emotions are funny things and are also HIGHLY addictive chemicals.

Its not uncommon for men (or women) to become ‘’addicted’’ to the emotion of depression after a breakup. This is also true of the chemicals involved with feeling like you’re in love.

–You remember back to how things were in the beginning of your relationship. Back when everything was perfect.

Well one of the reasons why everything is usually so great in the beginning is because the brain is (once again) releasing chemicals that make you feel good: happiness, joy, excitement, etc. These emotions are addictive as well.

You wonder, over and over, what it would take for you to get things back to how they used to be.

There were a several things I came to realize that I want to share with you right here. These realizations really helped me personally overcome all this negativity that you probably are currently going through. Here they are:

1.) Men Hurt Worse Than Women Do After A Breakup.

There is scientific research that backs this statement. There will always be exceptions, and this is not 100% always the case, but in most breakups this is true.

So why is it that men hurt worse than women do?

A woman’s support system is usually much stronger than the man’s is. So she’ll seek the advice and guidance of her close girlfriends, and family.

Below is quote from Hugo Schwyzer that supports this theory:

‘’Girl initially seems far more devastated. She talks to her friends, mourns publicly, seems genuinely distraught. Guy seems, by comparison, to hardly be in pain at all. Weeks go by, then months. Because she’s dealt with the hurt immediately, girlfriend is getting over things, moving on, ready for what comes next. Boyfriend, meanwhile, has fallen into a delayed depression. He may suddenly start calling, frantic to get her back, having suddenly realized breaking up was a “huge mistake.” He may even progress to what seems like stalking, begging and pleading for “another try.’’

Another difference: she’ll often be heartbroken over things (taking place in the relationship), that the man won’t even realize is going wrong. This is often the case even if she’s actually telling him these problems as they occur.

Months later of course, he’ll realize the error of his ways. Women just pick up on subtle things that are happening (or not happening) much easier and faster than men do.

There is nothing wrong with this, for the most part. Probably a better way of putting this is that: As a guy, you shouldn’t ‘’beat yourself up’’ too badly, months later when you’re realizing all the things you did wrong. The things you didn’t pick up on.

The reason this happens is simply because men and women are different and have different strengths and weaknesses. Women are just naturally quicker to realize these type’s of details.

What WOULD be wrong on your part would be not learning from these mistakes and making them again with the next girl.

2.) If The Relationship Didn’t Work Out, Its Because It Wasn’t Healthy.

By definition, if a relationship fails, it’s because it was unhealthy. Now this is a complex statement. In saying this I don’t mean that she was necessarily an emotionally unhealthy person, or that you were, I simply mean ‘’the relationship’’ at the time the both of you were in it together, was not healthy.

Maybe its because you weren’t at a point in your life (or she wasn’t) where you were ready to be together.

Perhaps one or both of you hadn’t matured enough in certain areas for it to have worked out. It’s complex, its not black and white.

At the end of day, all that matters are the following lessons: Learn from your mistakes, don’t be too hard on yourself, STOP contacting her, move forward with your life, and most importantly forgive her and forgive yourself. This leads me to the last point.

3.) If You Wronged Her Or She Wronged You, You Have To FORGIVE.

Holding onto your anger, pain, and resentment towards her is only going to seriously HURT you. It will hurt you in the most insidious ways, mostly without you even being aware of it.

The only way to truly move on is to FORGIVE. Forgive her and forgive yourself. Forgiving yourself is just as important because like I mentioned above, chances are you feel a lot of guilt.

This may even mean taking up prayer, going to a support group, or something similar.

In closing I’ll say this: As unique as your situation may seem, what you are going through is VERY common. In 2017, all you have to do is spend 30 minutes on the internet or YouTube to realize I’m right about this.

Breakups are happening everywhere all the time, every day. The best thing for you to do right now is focus on making yourself STRONG. Do whatever it is you have to do, but make it happen, and always remember: Time heals all wounds.