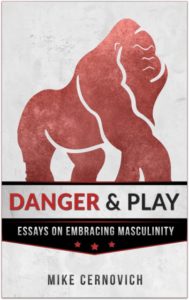 Mike Cernovich is a guy I’ve linked to in several of my posts so far. There is good reason for that. The guy knows his shit, and was one of the main inspirations for me when I started Mission Life Motion.

MLM is still a very new blog, but I have a vision in my head of where I want this brand to go over the next 10 years. It helps to have guys to model along the way, especially ones that have accomplished many of the goals already on my list.

In a relatively short period of time, its been amazing what Mike has been able to accomplish with his brand.

”Essays On Embracing Masculinity”, is essentially a collection of Mike’s early Danger and Play articles and podcasts. I imagine they’re what he considered to be ”The Best Of D & P”, which is why of the many articles on his blog, he choose to publish these ones in a book format.

Mike focuses on helping men in all the most important aspects of a man’s life: Masculinity, health and fitness, relationships and dating, friends and family, business/career success, mindset, motivation and inspiration, and even being dominant in the bedroom.

Even though I had already read many of the articles on his blog, and even some of the ones in this book, I was hooked from page 1. Mike has a very unique way of captivating your attention with his words, whether he’s writing them or speaking them. You’ll get just as hooked on his articles as you will on his podcasts.

Below I’m going to point out certain sections of the book and touch on some observations I made while reading.

1.) Masculinity, & Being Dominant in the Bedroom:

Masculinity is an important part of life, and over the years men have forgotten that its not only OK to be masculine, but its what the world (not just women) truly needs us to be.

The media, and femininity in the west have unfortunately manipulated many men into believing masculinity is something to be ashamed of. Even the food we eat here in America lower’s testosterone levels.

This is deep rabbit hole I could run down right now, but I’ll save that for future articles that will touch on this subject. Besides, the point here is to summarize the takeaways from this read.

They are tired of followers, and never wanted them in the first place.

Women also want a man that can order them around in the bedroom. Look no further than the millions of copies that ”50 Shades Of Grey” sold a few years back.

Cultivating a life that a woman wants to find herself a part of. Art exhibits and museums, cooking good meals, exotic wine, and interesting and unique hobbies. An apartment that shows you have class and taste also can go a long way.

Health and fitness is a big part of Danger and Play. Everything you could ever want to know about TRT, HRT, blood work, juicing (with juicer’s), nootropics, and anabolic steroids. In the book specifically, his focus areas however are on the mind/body connection, going from fit to big, how he trains, and juicing recipes.

By the way if you guys haven’t tried juicing yet, I highly suggest you check out his site FitJuice.com. There he has a ton of articles on different recipes and optimal ways of integrating juicing into your everyday life.

I’m a juicer myself and will have an article out soon with my own suggestions.

On another note, Mike mentions that a lot of guys are afraid of being ”too big”. He scoffs at this idea (so do I). Getting ”too big” is not something you’ll have to worry about, unless you’re on insulin or massive amounts HGH.

He accurately points out that: In the jungle, size is king. Being fit is one thing, but being big is quite another, and the later is the category you want to be.

Any guy who thinks otherwise hasn’t been eating enough testosterone sustaining food (my words, not Mike’s, although I’m sure he would agree).

Everyone knows this on an internal level but very few will admit its the truth: People love narcissists.

Dress nicer, show emotion, take advantage of body language, take up space, use verbal humor. These are some tools you can use to trigger emotions in people and make them like you. Arnold Schwarzenegger is a great example of someone who does all these successfully.

Become the man to see. Women want to be seen with physically attractive and impressive men. Men who dress well, and can make almost anything they wear look good on them.

Women care much more about their social status, and what other people think of them (especially other women), than men do. With this said, for them to be seen with a tall, big, handsome, well dressed man is a big plus for them.

Be that guy, or look as close to him as you possibly can.

–Getting Out Of The Friend Zone:  Stop being ”just friends” with girls. Stop waiting around the table like a vulture for scraps to fall. Have some goddamn self respect. Instead, be a lion, it will serve you much better.

–Charisma and Connection: When you sit or talk with someone, you always want to be giving off the vibe of:

You’ll never have charisma without a connection. It’s worth it for you to focus on building a deeper connection with people. Employ the above mantra, ingrain it into your head, repeat it daily, and you’ll naturally start coming off that way.

I’ll review the 2nd half of this book in my next post.