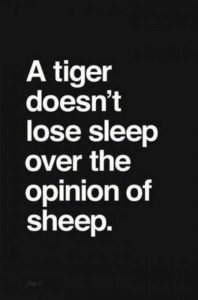 I see it everyday, people who are all-consumed with their social status and ranking. It’s especially prevalent with women. Their entire lives are consumed with molding the way other people perceive them.

Although nowhere near as guilty of this as women are, I’m seeing men doing this more and more every day. Their own needs come second to needs of the image they feel they have to live up to.

What people don’t realize is that other people don’t care about you as much as you think they do. I don’t mean that to sound like I’m coming from a place of negativity, that’s just the cold hard reality of life.

Instead, those other people you think you’re impressing are spending all their time trying to figure out how to impress you, and how to mold your perception of them.

They’re doing the same thing you are.

Here’s something I learned recently: As soon as I stopped caring about molding the perception other people had of me, I was not only A LOT happier, but it was easier to mold their opinions anyway.

THAT’S BECAUSE I WASN’T TRYING TO.

Ironic isn’t it? People were more impressed and curious as to why I didn’t care what they thought, then they were about my status (something they never cared about anyway, even if they thought they did).

Don’t buy cars, a watch, an apartment, or get married because of the status it brings you. Don’t get into a relationship just so you can post pictures of yourself with her on facebook or IG.

Stop letting your reality be dictated by other people. People that for the most part, don’t care about you. When you start trying to help other people, instead of trying to manipulate their opinion, the tables will turn and they’ll start to care more about you.

They’ll start caring because your bringing something to table and offering value (instead of always trying to take their validation).

It may sound a corny but: be a giver, not a taker. Also, do not give validation to people that seek it and offer nothing in return either (this one drives me absolutely crazy).

Just because somebody appears to need validation badly (even very badly) doesn’t mean you should give it to them. Trust me you are not doing them any favors and you’re sending them the wrong message. You’ll just perpetuate the problem and they’ll never learn from their mistakes (their pathetic validation-seeking character flaw).

Put differently: don’t be the exception to the rule I’m describing in this article. Only give credit where credit is due.

If a man wants validation he needs to earn like a man.

This is actually all true for women too, so listen up ladies. Life becomes so much better when you buy things for you and not for status. When you do things because they’re in your best interest.

Try it sometime. Take the plunge and just try it, you’re going to be OK, I promise.

Not posting another dumbass comment on facebook is going to be OK, really you’ll be fine. You don’t have to remind people you exist through some mindless post, they either already know or they don’t care.

Either way, if you’re a man who lives with a purpose (and you should be), why should their opinions of your ”social ranking” matter to you?

2 minutes on facebook to me is like spending 2 minutes in hell, I immediately feel negative and disgusted at all the validation seeking posts.

Respect is something that is earned, its not given. The admiration of other people is a privilege, not a right.

Bring something to the table, and offer value. The sooner you stop caring what other people think, the sooner they’ll start respecting and admiring you.