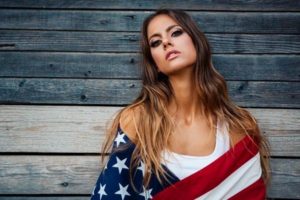 American woman: yes, let’s talk about her for a minute here. The problems outlined here, are the problems recent changes western civilization has brought onto the behavior of women. Mostly in the United States, however now it’s happening in other countries as well. Really any westernized country, but for the most part the U.S. is the country that has been the most affected by this.

The elite’s agenda to push feminism onto our culture, succeeded in corrupting our women. They did this by playing on a woman’s natural instints and emotions. This agenda also succeeded in destroying families: ones that have already started, and even ones that haven’t yet.

Before you get the wrong impression here, I want to be clear about something:

Women are not perfect, neither are men. However, I don’t think women are fully to blame for what’s happened to them these last 50 years. Yes, this has been a slow burn gentleman. These changes we’re perpetrated from top-down, on purpose, intentionally, and with a specific end in mind. This is why this list is exclusive to western women, and not women from say, Southeast Asia or South America.

Her Instagram account is more sacred to her, than the birth of Christ himself would have been.

Nothing and no one will ever take the sacred place in her life, that is occupied by her Instagram account. The modern woman is so starved for validation, that she’ll stop at nothing to get her daily dopamine hits. These of course are provided courtesy of social media. Instagram being the main culprit.

Think I’m exaggerating here? Maybe my passion is coming through a little in my words, but I’m actually not. There is a reason I feel this way, and there is a reason so many other men also feel this way. Most men share this same viewpoint here. Men are sick of this seeing this narcissistic behavior in women.

One good thing social media did do, is it made these narcissistic women easier to spot. For the record: I don’t believe social media is ruining women, I just think it’s brought the narcissism out of the women (who are already narcissistic).

Women are naturally validation seeking creatures. The degenerates that created these technologies played upon these inherent weaknesses in women, by creating apps that would addict them to these very apps. These apps were designed to be addictive.

Ever noticed women in America have this attitude about them that shows defensiveness when a comment is made, or anything comes up regarding them not being self-sufficient? If this were just a ”one-off” case where this woman over here acted like this, or that woman over there acted like that, then I wouldn’t even be bringing this up. The reason I’m bringing this up: is because its not just one or two American women that do this, its almost ALL of them.

This has become so prevalent in American culture (for women to act like this) that even women who weren’t born here develop this defensive attitude about being ”independent and self-sufficient”.

Back in the day, it was only be black women who acted like this, or displayed this kind of defensive ”I’m gonna tell you how it’s gonna be mister” attitude. Now it’s every woman: American women, Latin women, Asian women, British women, ALL of them.

Where do they learn this?

3.) She’s been raised to believe she is no different or is EXACTLY the same as a man.

This might be the biggest issue on this whole list. Hollywood has been ramming this agenda down our throats for years now. This is rooted in their desire to see humankind evolve into the next breed of species: a half-man, half-woman.

Women that are very skillfully made to look like men.

This is nothing new in the world of Hollywood, they have been doing this for years. Making a mockery of us. This agenda also permeates our society and the workforce. They tried to slowly creep this agenda into our culture by releasing movies that pushed and promoted this message. They were very subtle about too for a while there too.

Problem is: now they are desperate. They feel like they’re running out of time. This is in large part due to the election of Donald Trump, something that never should have happened in their eyes.

Corporations on another note, don’t give a damn about feminism, or whatever hidden agenda is hiding beneath the surface in our society. What corporations care about is money. Corporations know that there is often more money to be made by pushing and aligning with the equalism agenda than there is otherwise.

Its the almighty dollar that matters to them, what’s good and what’s right for society can be damned and can go to straight to hell for all they care.

4.) She values her career, and her ”freedom” more than finding a man or raising a family.

My God this is so damn true nowadays, and is prevalent everywhere.  Most 29-year-old women here, care nothing about having children, and are completely focused on their careers. Women in our country have been raised to believe that they’re men, and therefore need to go to a University, go into massive debt to obtain a college degree, and then be corporate wage slave the rest of their lives, working under florescent lights to lines the pockets of someone else’s business.

This is disguised as ”female empowerment”, and women everywhere are falling for this hook, line, and sinker. They waste years of their SMV youth, riding the cock carousel, letting their eggs dry up, and going into consumer debt. Only to wake up one day at 40, with a house full of cats, and realize that it’s all too late.

And a lot of these women who end up in this situation are committing suicide, because of how unhappy they are.

They realize they can no longer compete in the sexual marketplace, and that they put off the start of their family for too long.

5.) Women today are encouraged to be promiscuous. They are taught sexual encounters with random men ”liberate & empower them”.

Donovan Sharpe talks about this all the time. Women think they have been ”liberated” by banging a bunch of guys. The real fact of the matter guys: is the more sexual partners a woman racks up, the less able she is to pair-bond with any one man. She loses her soul, one cock at a time.

This ties back in and is rooted in the idea that men and women are exactly the same.

This is not part of a woman’s DNA, I’m sorry girls it just isn’t, I don’t care what anyone says.

Men are turned off by women who are promiscuous and that sleep around all the time. Promiscuous women are not a turn on for men.

Women in America today basically just have no concept of ”the wall”, and are taught they have as much time as men do, to delay childbirth.

This is not a double-standard. Sperm is cheap, eggs are not. Men can reproduce until the day they die, women cannot. Women therefore, were designed to be monogamous.

Men who sleep with a lot of women are attractive to women. Women have always desired men that have been pre-approved by other women. This is called ”pre-selection”. This is not the case when we look at this the other way around however.

6.) Women are completely and entirely oblivious to degenerate cultural influences.

Women over here I’ve noticed have no concept of what the term ”degeneracy” means. They really have no inherent concept of the term. They’ll readily listen to scumbag artists like ”Cardi B”, ”Lizzo”, and any and all other hip-hop and/or R&B artists . What they don’t realize is that the message these artists promote, through their words and lyrics, over time begins to seep into their subconscious.

Over time it begins to affect their behavior, and their actions, viewpoints, an perspectives. It’s no wonder this country is in the shitter right now, after being subjected to this type of music, going on 2 decades now. This type of music has been mainstream and popular, since the late 90’s. The mother’s and older sisters of these girls were listening to artists like Eminem and Snoop Dogg back in the late 90’s and early 2000’s.

The message these types of artists and songs give to women (who are much more impressionable to cultural influences than men are), is that being a slut is ”normal”, and acceptable. This is part of why you see women walking around nowadays hardly wearing anything, or basically dressing like strippers.

It’s conduct unbecoming of a lady. Prostitutes do have their place in a society, but not every girl you see walking down the street, is suppose to resemble one. Believe it or not guys that’s actually not normal.

7.) American women have a skewed, and misplaced view of their own sexual market value.

Women today in America, have such a vastly misplaced understanding of what sexual marketplace value is, that it’s astonishing. You’ve got all these women out there now that think they’re 9’s (on a scale of 1-10) that are actually only 6’s or 7’s, or worse.

They would be outraged because deep down they would realize that Rollo’s right, but they would be mad at the same time because they were raised on the lie that a high SMV value is the same for a woman, that it is for a man.

It’s essentially that aspect of the red pill that a woman gets ”red pill rage” over. After all, why wouldn’t a woman get outraged over that? She’s been told all her life she has all this time to slut herself around and delay marriage and childbirth, only to find out after she’s reached the wall how the sexual marketplace really works.

8.) American women are taught by feminism, to have and maintain a ”victim” mentality.

Women have been taught that they have been ”oppressed”. That men have held them down from reaching their potential, and that the ”Evil Patriarchy” has to be brought to its knees. It’s unfortunate to see all these women act as if they are victims.

Nothing could be further from the truth. Women were never oppressed, they just played different roles then men did. Men and women are better together than they are apart: they are complements to one another. One is there to lift up the other one, and to help them in ways they have a hard time with when they’re by themselves.

America is not a great place to be a single, heterosexual man. The women here have been completely corrupted by wayward cultural influences. America is a sinking ship, it cannot be salvaged or saved. You just have to realize this before you make any major life decisions, like committing to a marriage or having kids here.

I’m not saying you can’t find a good woman to do that with here (if you look long and hard), but I am saying it’s not going to be easy. You’re not living in the same world that your grandfather or even your father grew up in. These are the end days of genuine pair-bonding between men and women. It’s increasingly and increasingly becoming the case, that men have to expatriate from this country, to find a woman worth committing to.

Men: Be careful with American women, you have been warned.