Once a guy like me comes along and points certain things out, you start to notice them everywhere. You may even be exhibiting the behaviors I’m going to flag here.

If so, consider this your wake up call. Its time to snap out of it, and start acting like a man.

Below I’m going to point out the 2 most common feminine behaviors I see in western men. These are becoming increasingly common and its time to do something about it.

If you’re a man, and you’re engaging in more than 1 of the feminine behaviors below, then I’m here to shake some sense into you:

2 COMMON BEHAVIORS AND/OR DEFINITIONS OF FEMININITY:

1.) Moody, hormonal, and flow like with your state, thoughts, feelings and emotions.

If you’re a man and what I’ve described above sounds you, you may need to get your testosterone levels checked. I’m not saying that as a joke, I’m very serious. This is especially true if you’re over the age of 30. At 30, a man’s natural testosterone levels start to decline. When testosterone drops, estrogen rises.

When estrogen rises, it can cause exactly what I described above to start occurring. You get hormonal, moody and more freely flow in and out of varying emotional states.

SOLUTION FOR MEN: Realize that while this is normal for a woman, you aren’t a woman are you? Act like man and get control of your emotions. Women do not want or need a man that flows in out of emotions like they do. Women need a man that displays the opposite of that: they need a rock. An unmoving rock. 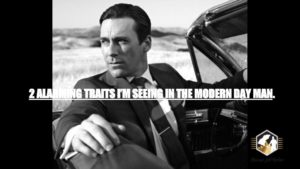 Another Solution: Study The Character Don Draper (from Mad Men)

2.) ”Window Shopping” your way through your day, and more freely allowing yourself to be guided by your current state of feelings.

Put differently: getting off course from the day’s plan. Allowing text messages, social media like snap chat, instagram, or facebook to deviate you from the days tasks.

Getting easily distracted, lacking direction, focus, concentration and clarity. As a man, you cannot allow this to be a daily occurrence for you. If it is, that means you are lacking in self control.

SOLUTION FOR MEN: Every day and week of your life should have a plan. Every hour of your day, except for the last one, should be filled with you getting stuff done checking things off your to-do list.

I don’t necessarily mean an errand to-do list. Just any goal, book, project or task that you’re ambitious about getting though.

Be ambitious about your goals. When you think about accomplishing them or completing them, it should get you excited. If they don’t make you feel this way then you need to throw them out and get ones that do.

Leave these 2 behaviors to the girls. They are feminine characteristics and are not behaviors a man should display.

Women (whether they all admit it or not) want to be feminine, they want to act and be treated like women.

What they don’t want is for you to act like one, so DON’T.

Until we meet again,